At the northern tip of Colombia, the Sierra Nevada de Santa Marta mountains rise up from the Caribbean Sea to become one of the country’s most biodiverse regions. This is the highest coastal mountain

range on Earth, holding a myriad of unique habitats across its various elevations so that many endemic wildlife species have evolved to survive and thrive only here.

For instance, high atop the mountains within the cloud forest resides the Santa Marta Parakeet, an ornate green bird with flecks of fiery orange feathers and vibrant blue wing tips that inhabits a small range of just 263 square miles surrounding the San Lorenzo Ridge. Until the 1980s, the species was fairly common. However, as a result of devastating habitat destruction in the region during the past four decades, the parakeet is now Endangered with a declining population estimated to be less than 10,000 individuals. Much of the region’s other endemic wildlife also faces the grave threat of extinction, including the Santa Marta Toro (a tree-dwelling rodent that resembles a hamster), the Santa Marta Sabrewing (a rare green hummingbird that remains virtually unknown), and the Santa Marta Bush-tyrant (a brown flycatcher with a declining population of less than 1,700 mature individuals).

Today, only 15% of the original forest cover remains on the Sierra Nevada mountains, driving the area’s unique wildlife to the edge of extinction. Much of this loss is a result of expanding cattle ranches and coffee farms. Exacerbating the situation, deforested lands have been replanted with non-native trees, such as Mexican pines and eucalyptus. What little native habitat remains is gravely at risk from ongoing wildfires, set by local residents.

Since 2004, Women for Conservation and its Colombian partner ProAves have worked with communities in the Sierra Nevada de Santa Marta through a multitude of educational workshops and classes that raise awareness about the region’s exceptional endemic and endangered wildlife as well as the need for immediate conservation action. In these classes, both women and children learn to identify species as they participate in bird watching and nature lessons. 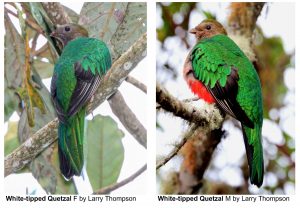 Having developed a true appreciation for the region’s wildlife and their unique natural heritage, the communities now host an annual parrot festival in celebration of the Santa Marta Parakeet and the Sierra Nevada’s outstanding biodiversity.

To reduce deforestation and destruction of habitat, women have been trained in sustainable livelihoods – such as the production of natural candles, soaps, jewelry, backpacks, and other artisan crafts. These ecologically friendly activities provide an alternative source of income, which empowers women while reducing their depletion of the region’s natural resources. Additionally, family planning campaigns have been introduced that offer information and access to contraceptives, helping to alleviate poverty and reduce stress on the natural environment. Finally, to promote reforestation and restoration of habitat, women’s groups have established tree nurseries with native species, which are educational models for the community.

Today, Women for Conservation seeks to expand its efforts by forming relationships with groups of women in additional communities of the Sierra Nevada de Santa Marta, and plans are being developed to train communities in preventing the spread of wildfires and becoming part of Colombia’s growing ecotourism industry.

Conservation Actions:Educational workshops to raise awareness about local endangered wildlife; reforestation and restoration of habitat using tree nurseries; development of alternative income sources including production of natural candles, soaps, and jewelry; provision of information and access to family planning
PrevPreviousEmpowering Women to Save the Blue-billed Curassow
NextProtecting Choco’s BiodiversityNext
We use cookies on our website to give you the most relevant experience by remembering your preferences and repeat visits. By clicking “Accept All”, you consent to the use of ALL the cookies. However, you may visit "Cookie Settings" to provide a controlled consent.
Cookie SettingsAccept All
Manage consent

This website uses cookies to improve your experience while you navigate through the website. Out of these, the cookies that are categorized as necessary are stored on your browser as they are essential for the working of basic functionalities of the website. We also use third-party cookies that help us analyze and understand how you use this website. These cookies will be stored in your browser only with your consent. You also have the option to opt-out of these cookies. But opting out of some of these cookies may affect your browsing experience.
Necessary Always Enabled
Necessary cookies are absolutely essential for the website to function properly. These cookies ensure basic functionalities and security features of the website, anonymously.
Functional
Functional cookies help to perform certain functionalities like sharing the content of the website on social media platforms, collect feedbacks, and other third-party features.
Performance
Performance cookies are used to understand and analyze the key performance indexes of the website which helps in delivering a better user experience for the visitors.
Analytics
Analytical cookies are used to understand how visitors interact with the website. These cookies help provide information on metrics the number of visitors, bounce rate, traffic source, etc.
Advertisement
Advertisement cookies are used to provide visitors with relevant ads and marketing campaigns. These cookies track visitors across websites and collect information to provide customized ads.
Others
Other uncategorized cookies are those that are being analyzed and have not been classified into a category as yet.
SAVE & ACCEPT